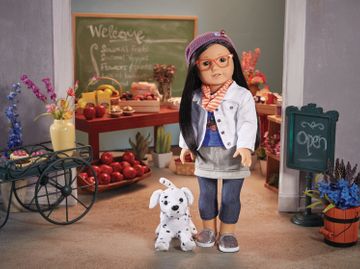 MIDDLETON, Wis., April 27, 2017 -- Lights, camera, action! Today, American Girl brings its popular stop-motion vlogger character, Z Yang, to life for millions of fans who have come to know and love her as the star of the company's popular web series, Z's Crew. Inspired by the American Girl Stop Motion (AGSM) phenomenon, the series has garnered more than three million views on YouTube and continues to draw a large fan base.

Z (short for Suzie) is a Korean American hailing from Seattle, and is the latest addition to American Girl's new series of contemporary characters and stories designed to speak to more girls' interests, backgrounds, and experiences. Through Z, girls get to learn more about this creative young filmmaker who loves staying connected with friends and sharing a good story through her stop motion videos. Z's adventures unfold in a two-book series, The Real Z and Z on Location, as well as an Amazon Original Special, An American Girl Story: Summer Camp Friends for Life, scheduled to premiere on Amazon Prime Video on June 9, 2017.

Z jumps from the screen to beautiful 18-inch doll, featuring long dark-brown hair, warm brown eyes, and a beauty mark on her left cheek. The Z doll comes dressed in her signature outfit, along with the first book in the series. The full Z product collection includes several creatively-inspired doll outfits and accessories that reflect her filmmaking interests, such as a wooden fold-out desk—complete with a chair and several pretend video-making supplies like a laptop and video monitor, as well as her own filming accessories like a camera, smartphone, and tripod, to name a few.

The Z books, published by Scholastic and written by author Jen Calonita, introduce readers to Suzie "Z" Yang and her vlog, Z's Crew, which she created to share her passion about stop motion animation and ended up making friends all over the world. Now, she's taking a shot at her dream of becoming a true filmmaker by participating in a film festival documentary contest. Outside of her comfort zone and under the stress of trying to be a real filmmaker, Z loses sight of why she liked making movies in the first place. And, with a little help from her crew, she discovers that to be a real filmmaker, she'll first have to be her real self.

Other Z-related initiatives being held throughout the year include the following:

The Z collection is available on April 27, 2017, through American Girl's catalogue; at americangirl.com; at all American Girl retail locations nationwide; and at the American Girl brand store at Amazon: www.amazon.com/americangirl. Outside of the U.S, Z products are available at American Girl specialty boutiques at select Indigo™ and Chapters™ in Canada. The Z books can also be purchased through retail and online booksellers.

To view the original version on PR Newswire, visit:http://www.prnewswire.com/news-releases/american-girl-debuts-new-contemporary-character-z-yang-a-filmmaker-who-tells-stories-through-her-own-creative-lens-300446829.html