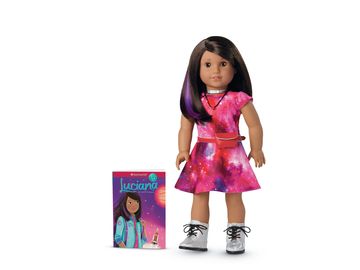 MIDDLETON, Wis., December 28, 2017 -- 3...2...1...It's time to blast off with American Girl's 2018 Girl of the Year™, Luciana Vega™! Officially launching on January 1, Luciana is the latest in American Girl's long line of inspiring characters that encourage girls to think about who they want to be and how they want to make their mark in the world—no matter the challenges they may face. In Luciana, girls will meet a creative, confident 11-year-old girl and aspiring astronaut who dreams of being the first person to go to Mars. And, while she has the skills and smarts to achieve her goals, she also learns that being a good leader and team player right here on Earth is the best first step.

"We're proud to introduce fans to American Girl's 2018 Girl of the Year, Luciana Vega—a champion of STEM and a natural-born leader who puts her whole heart into making her dreams a reality," says Katy Dickson, president of American Girl. "Luciana is a role model for today's girls—empowering them to defy stereotypes, and embrace risks that will teach them about failure and success as they chart their own course in life—whatever the goal. For us, it's all about building girls of strong character, and it's why we're continuing to encourage girls to lead change and embrace #charactercounts."

Luciana's world comes to life via a beautiful 18-inch Luciana™ doll, featuring warm brown eyes, medium skin, and dark brown hair with a distinctive purple streak to show off her creative side.    Other STEM-inspired outfits, accessories, and products that reflect her Space Camp® experience include Luciana's Flight Suit and Space Suit, her Maker Station, and a Mars Habitat loaded with science and research essentials for hours of pretend play. And—for the first time—girls can further engage in Luciana's world by downloading the American Girl app and scanning her catalogue pages and products to unlock exclusive content, including augmented reality, trailers and videos, space simulations, quizzes and challenges, and much more.

Additionally, Luciana's story is chronicled in a chapter book series written by Erin Teagan and published by Scholastic. The first two books, available now, introduce readers to Luciana, a young girl of Chilean descent with a serious science streak, who loves the idea of exploring new territories in space. After winning a scholarship to Space Camp in Huntsville, Alabama, Luciana is thrilled to launch her dream of landing on Mars. But as she ascends from Space Camp kid to youth astronaut trainee, she faces many challenges that test her competitive spirit and self-confidence, and she must find the courage to embrace the unknown with bravery, curiosity, and wonder.

To help ensure the accuracy of Luciana's story and product line, American Girl worked with the following four-member Advisory Board who were integral to Luciana's development: Dr. Ellen Stofan, former NASA Chief Scientist; Dr. Deborah Barnhart, CEO and Executive Director of the U.S. Space & Rocket Center; Dr. Megan McArthur Behnken, NASA Astronaut; and Maureen O'Brien, Manager of Strategic Alliances at NASA. In addition, a team of American Girl editors and product designers visited Space Camp and NASA's Johnson Space Center in Houston to gain insight into a day in the life of a Space Camp trainee—from putting on space suits and learning about the "right" way to eat in space to conducting a mission in micro-gravity. American Girl's partnership with NASA was developed through the Space Act Agreement to inform and inspire the wider public (and especially young girls) about the excitement of space and STEM careers.

To engage girls and boys with Luciana's message, American Girl—in partnerships with Scholastic, NASA, and Space Camp—has funded Blast Off to Discovery, an educational program to help third though fifth-grade students explore the wonder of space through Luciana-inspired content, including STEM-based lesson plans and classroom activities, videos, a game, and more. The program will be available on www.scholastic.com starting January 31, 2018. In addition, American Girl and Scholastic will host a Mission to Mars Sweepstakes where families can go on a series of weekly missions for a chance to win several prizes, including a grand prize trip to Space Camp valued at over $2,000.

Other Luciana-related initiatives being held throughout the year include the following:

The Luciana collection is available on January 1, 2018, through American Girl's catalogue; at americangirl.com; at all American Girl retail locations nationwide; and at American Girl specialty boutiques at select Indigo™ and Chapters™ in Canada. The Luciana books can also be purchased through retail and online booksellers, and select Luciana products will also be available at the U.S. Space & Rocket Center gift shop. To request a free catalogue, call 1-800-845-0005; to join the company's loyalty program, AG Rewards, go to americangirl.com/REWARDS.

ABOUT AMERICAN GIRL
American Girl is a premium brand for girls and a wholly-owned subsidiary of Mattel, Inc. (NASDAQ:MAT, www.mattel.com), a creations company that inspires the wonder of childhood. Headquartered in Middleton, WI, American Girl offers an inspiring world of dolls, content, and experiences that nourish a girl's spirit and help develop her strength of character. Best-selling lines include Truly Me™, Girl of the Year™, Bitty Baby™, WellieWishers™, and American Girl's classic historical characters. The company sells products through its award-winning catalogue, on americangirl.com, in its proprietary U.S. experiential retail stores, as well as at specialty retailers nationwide. By inspiring girls to be their best, American Girl has earned the loyalty of millions and the praise and trust of parents and educators.