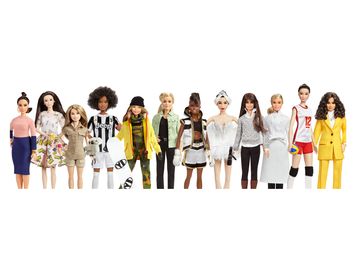 EL SEGUNDO, Calif., March 6, 2018 -- Today, ahead of International Women's Day, Barbie is honoring 17 historical and modern-day role models from around the world. These women come from diverse backgrounds and fields and are breaking boundaries to inspire the next generation of girls. With 81 percent* of moms globally worried about the type of role models their daughters are exposed to, Barbie is igniting a conversation around the importance of positive role models.

"As a brand that inspires the limitless potential in girls, Barbie will be honoring its largest line up of role models timed to International Women's Day because we know that you can't be what you can't see," said Lisa McKnight, Senior Vice President and General Manager, Barbie. "Girls have always been able to play out different roles and careers with Barbie and we are thrilled to shine a light on real life role models to remind them that they can be anything."

Sparking a global conversation leading up to International Women's Day, the Barbie brand is:

Barbie has previously honored women, including Ibtihaj Muhammad, Misty Copeland, Ava DuVernay, Eva Chen and Ashley Graham. Through the program, which started in 2015, Sheroes are given the Barbie brand's highest honor, a one-of-a-kind doll made in their likeness, in celebration of their roles in expanding the possibilities for girls everywhere.

Visit www.Barbie.com/rolemodels for more information on the global role models and program. Follow @barbie and @barbiestyle on social media to join in the conversation using #MoreRoleModels.

* This online survey of 8,000 moms of daughters aged 0-10 years old, was commissioned by Mattel and conducted by market research company OnePoll, in accordance with the Market Research Society's code of conduct.

Mattel is a global learning, development and play company that inspires the next generation of kids to shape a brighter tomorrow. Through our portfolio of iconic consumer brands, including American Girl®, Barbie®, Fisher-Price®, Hot Wheels® and Thomas & Friends™, we create systems of play, content and experiences that help kids unlock their full potential. Mattel also creates inspiring and innovative products in collaboration with leading entertainment and technology companies as well as other partners. With a global workforce of approximately 32,000 people, Mattel operates in 40 countries and territories and sells products in more than 150 nations. Visit us online at www.mattel.com.