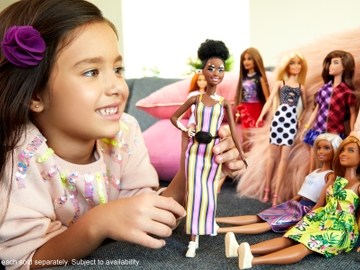 EL SEGUNDO, Calif.-- October 1, 2020 -- Today, Barbie®, and a team of neuroscientists from Cardiff University, announces findings of a new study conducted using neuroscience for the first time to explore the positive impact doll play has on children, bringing to light new evidence that doll play activates brain regions that allow children to develop empathy and social information processing skills, even when playing by themselves.

Over the past 18 months, senior lecturer Dr. Sarah Gerson and colleagues at Cardiff University’s Centre for Human Developmental Science have used neuroimaging technology to provide the first indications of the benefits of doll play at a brain level. Through monitoring the brain activity of 33 children* between the ages of 4 and 8, as they played with a range of Barbie dolls, the team found that the posterior superior temporal sulcus (pSTS), a region of the brain associated with social information processing such as empathy, was activated even when the child was playing on their own. These benefits of solo doll play were shown to be equal for both boys and girls.

Dr. Gerson explains: “This is a completely new finding. We use this area of the brain when we think about other people, especially when we think about another person’s thoughts or feelings. Dolls encourage them to create their own little imaginary worlds, as opposed to say, problem-solving or building games. They encourage children to think about other people and how they might interact with each other. The fact that we saw the pSTS to be active in our study shows that playing with dolls is helping them rehearse some of the social skills they will need in later life. Because this brain region has been shown to play a similar role in supporting empathy and social processing across six continents, these findings are likely to be country agnostic”.

The dolls used included a diverse range of Barbie dolls and play sets, with all Barbie dolls and sets returned to starting positions before each child began their test to ensure consistency of experience. Tablet play was carried out using games that allow children to engage with open and creative play (rather than a rule or goal-based games) to provide a similar play experience to doll play.

To understand the relevancy of these neuroscience findings, Barbie independently commissioned a global survey** that asked more than 15,000 parents of children in 22 countries. Results of this showed 91 percent of parents ranked empathy as a key social skill they would like their child to develop, but only 26 percent were aware that doll play could help their child develop these skills. During this time at home, parents are increasingly worried about ensuring their child is developing social development skills, with more than two-thirds (70 percent) saying they are concerned about how this isolation might affect their child and how their child interacts with others. Similarly, 74 percent of parents are more likely to encourage their child to play with a toy if they knew it was proven to help their child develop social and emotional skills, like empathy.

“As leaders in the dolls category, we’ve always known that doll play has a positive impact on kids, but up until now, we have not had neuroscientific data that demonstrates these benefits,” says Lisa McKnight, SVP and Global Head of Barbie and Dolls, Mattel. “The findings of this research highlights that playing with dolls, such as Barbie, offers positive benefits in preparing children for the future through nurturing social skills like empathy. As we continue to inspire the limitless potential in every child, we are proud to offer dolls that encourage skills we know are highly valued by parents and are determinants in children’s future emotional, academic, and social success.”

Barbie will be supporting these findings with an online hub, Barbie.com/BenefitsOfDollPlay, featuring resources for parents, caregivers, and children, to assist them in enhancing and applying their social processing skills. These resources have been developed alongside leading empathy expert, writer, and educational psychologist, Dr. Michele Borba.

Michele Borba says: “The latest scientific findings from Cardiff University and Barbie are extraordinary and so relevant to the times we are living, given the limited social interaction our children can have. It’s been shown that children who have developed empathy and social skills early in life can have better grades, stay in school longer and make healthier choices overall. Empathetic children might also be more likely to stand up for a child being bullied and try to engage and resolve the conflict. Understanding that kids can help develop these skills through playing with dolls like Barbie, is remarkable and a helpful tool for parents.”

The results of the study are published today in Frontiers in Human Neuroscience as ‘Exploring the Benefits of Doll Play through Neuroscience.’ Recognising that this study is a first step towards understanding the positive impact of doll play with further research required to build on these initial findings, Dr. Sarah Gerson and the Cardiff University team along with Mattel, have committed to further neuroscience studies in 2021.

Further details about the Neuroscience study

To gather the data Dr. Sarah Gerson and the team used a new neuroimaging technology, functional near-infrared spectroscopy (fNIRS), which makes it possible to scan brain activity while children are moving around. The technology comprises of head-worn caps allowing for free movement. The tests were conducted in a controlled testing room. The children’s play was split into different sections so the team could capture the brain activity relating to each other kind of play separately: playing with the dolls on their own; playing with the dolls together with another person (the Research Assistant); playing with the tablet game on their own and playing with the tablet game together with another person (the Research Assistant). The dolls used included a wide range of diverse Barbie’s family sets, careers set, Dream House set, and animal set with all Barbie dolls and sets returned to starting positions before each child began their test to ensure consistency of experience. Tablet play was carried out using games that were chosen for allowing children to engage with open and creative play (rather than a rule or goal-based games) to provide a comparative play experience to doll play. The ethical review panel at the School of Psychology at Cardiff University approved all procedures from recruitment onwards, and children were recruited from a panel of families in the UK area who have previously opted into being contacted for taking part in research at Cardiff’s School of Psychology.

Cardiff University is recognised in independent government assessments as one of Britain’s leading teaching and research universities. It is a member of the Russell Group of the UK’s most research-intensive universities. The 2014 Research Excellence Framework ranked the University 5th in the UK for research excellence. Among its academic staff are two Nobel Laureates, including the winner of the 2007 Nobel Prize for Medicine, Professor Sir Martin Evans. Founded by Royal Charter in 1883, today the University combines impressive modern facilities and a dynamic approach to teaching and research. The University’s breadth of expertise encompasses: The College of Arts, Humanities and Social Sciences; the College of Biomedical and Life Sciences; and the College of Physical Sciences and Engineering, along with a longstanding commitment to lifelong learning.

Mattel is a leading global children's entertainment company that specializes in design and production of quality toys and consumer products. We create innovative products and experiences that inspire, entertain and develop children through play. We engage consumers through our portfolio of iconic franchises, including Barbie®, Hot Wheels®, American Girl®, Fisher-Price®, Thomas & Friends® and MEGA®, as well as other popular brands that we own or license in partnership with global entertainment companies. Our offerings include film and television content, gaming, music and live events. We operate in 40 locations and sell products in more than 150 countries in collaboration with the world's leading retail and technology companies. Since its founding in 1945, Mattel is proud to be a trusted partner in exploring the wonder of childhood and empowering kids to reach their full potential. Visit us online at mattel.com.